Below is the shot I was very fortunate to get of this UFO flying over Roberto’s Taco. Man, those tacos must be out of this world. I am going to have to stop and try them, but after this scare, I am just about afraid to stop in Baker, CA again. If you have the courage, and don’t mind possibly being abducted by Aliens, then by all means, stop and take in the sight(ings). 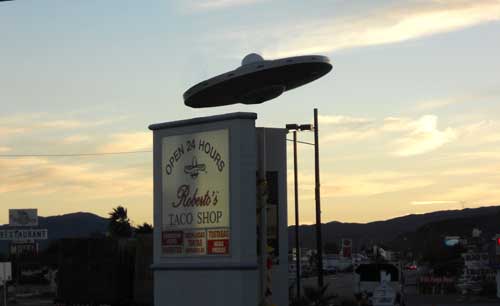 Then once I got my eyes off that UFO above, I spotted another over already landed on the ground, and a whole family got out of this space ship and was getting in a car. So I hurried up over there to see if they would let me get a picture. Geez, what was I thinking? I should have got out of there while I had the chance. But, I had to get the story for all my readers. Wish me luck that I come out of this alive.

So on the way over, I snapped this picture, just incase they took off like they were flying a UFO. Then I noticed they had a flat and was not going to go anywhere to fast and safe. So I waved at them and moved in a little closer for a better picture. They were all buckled in with the 2 small infants in the back seat with car seats. Hey, these Aliens may be alright after all. OK, here is the close up picture with the driver waving back. Wow, they must come here often, as they have their very own parking signs. So I was talking to them in a very gentle voice and got them to wave. No smile, but I thought the wave was a very important first step to show that I was not an aggressive earthling. 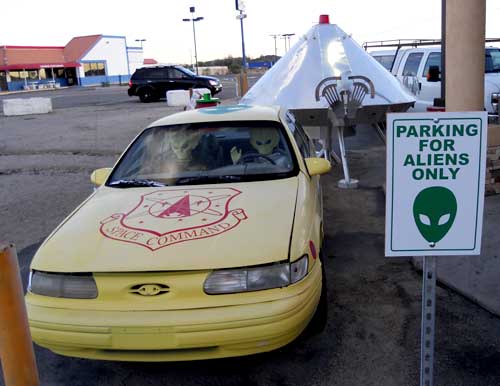 OK, better get a bit closer. I hope I don’t scare them off. I am already shaking myself. The whole time I was just hoping that these pictures were going to turn out OK so you could see this “Out Of This World” experience. If I was abducted, then hopefully someone may have found my camera and reported me missing. 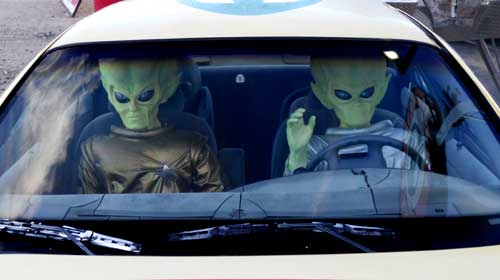 WOW!!! They seem to be rather friendly. Perhaps it is because they know they have a flat tire. Who knows, maybe they are out of gas as well. So while the getting is good, I move over to the side to take a picture of the little ones in the back. I just took one quick shot, as you know how mothers get very defensive and can get a bit hostile when they defend their young. I sure did not want to get zapped with some kind of ray gun. The young-n looks rather tired, probably due to “Ship Lag.” Jet lag would probably not effect them, as earthly flying craft are way to slow compared to UFO’s. 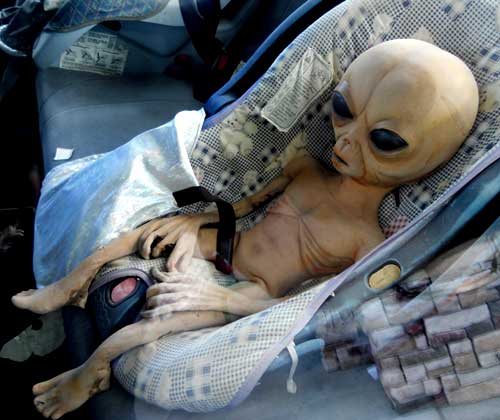 Wow, about that time the UFO behind me starts up and is ready to fly off. I guess it was the taxi that brought this family to Baker, CA for a night out on the town. Hum, just a few restaurants and a couple of gas stations and you have seen the whole town. Are they here for the “World’s Largest Thermometer?” Seems like they would have picked LA, as they would have probably not brought as much attention to themselves there. Anyway, here is the fella getting ready for take off. Hum, looks like he is praying. I guess he heard the bad news about one of our shuttles in the past and now he is a bit nervous. 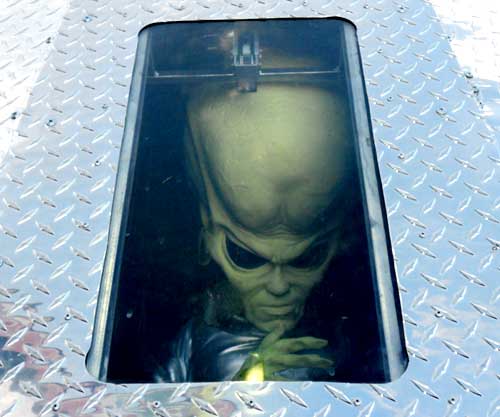 While he is praying, I back off to get another full UFO Ship picture before take off. 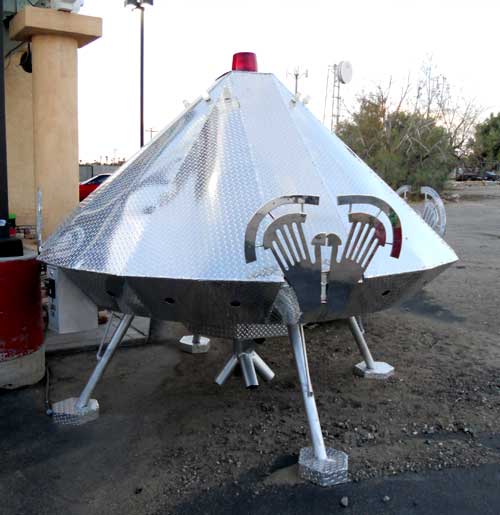 Wow, looks like I have got some time to back way off and get a picture with the building that it is currently sitting in front off. I guess they use this as a refill spot. Just check out the goodies inside the store! 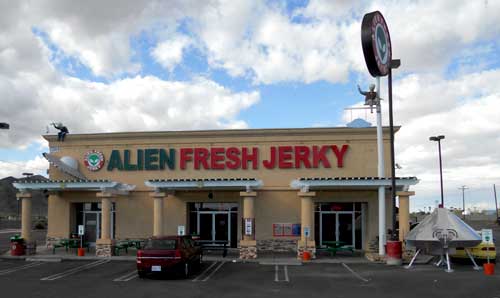 OK, before we go in, I had to wonder if this little Alien chewed and if he was from Texas. I mean, he had his cowboy boots on. I did not notice a huge belt buckle though. He did look rather friendly. Hum, wonder when he is going to come down for a break? I wonder if I could get an “Alien Autograph?. 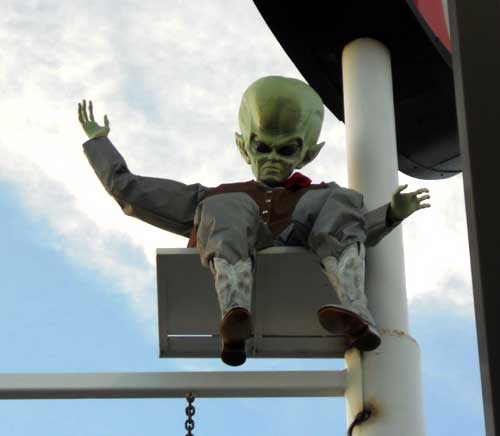 The Alien on the other side of the building must have had to much to drink as he still has his juice in his hand. Looks like he crashed his Space Ship right into the building and is looking down as if the building jumped right out in front of him. Do you think he may be from Texas too? I was running because I did not want to get hit by that drink from that altitude so I ran inside to see what all the excitement was all about. 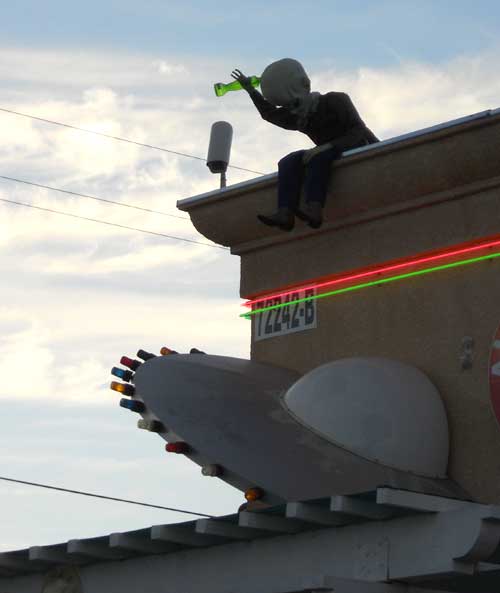 What do ya know, this friendly Alien wanted to tell me my fortune & future, if I had some spare change to throw his way. I am thinking I probably should so they can round up enough cash for a new tire. However, I just did not have it to spare. 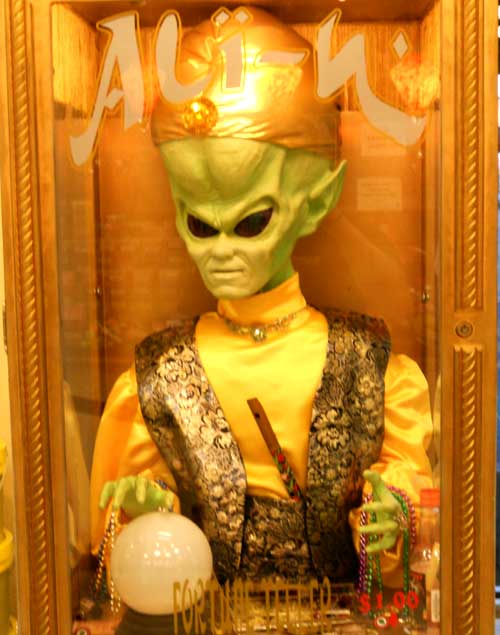 What do ya know, here is one of those Alien Drinking thing a ma bob’s. I thought I should get one, but after seeing what happen to that guy on the roof, I thought I better pass. Sure don’t need to hurt someone or get fired for drinking “Alien Juice!”

OK, moving along, there is so many different kinds of “Jerky” in here. I had no idea they raised so many different kinds of Aliens to make this stuff. They had different breeds like we do, so there was Beef Jerky, Elk Jerky, Chicken Jerky and I don’t know what all. I was kinda watching my back from this guy that looked like he was ready to pounce on me at anytime. He is probably in charge of watching for shop lifters. 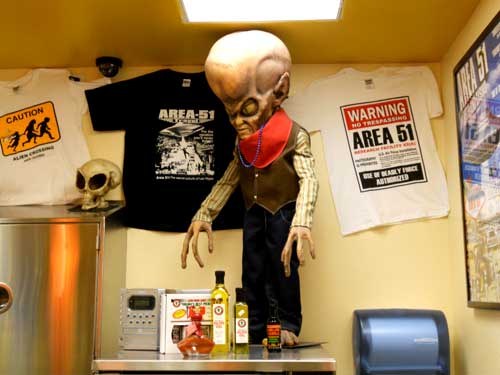 While he was looking away, I snapped a couple of different package labels to show to you. From the sounds of them, I think I better stick with Slim Jim’s. 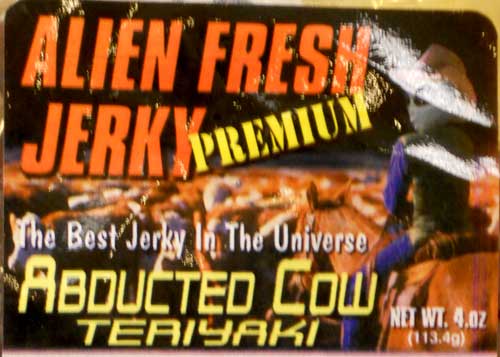 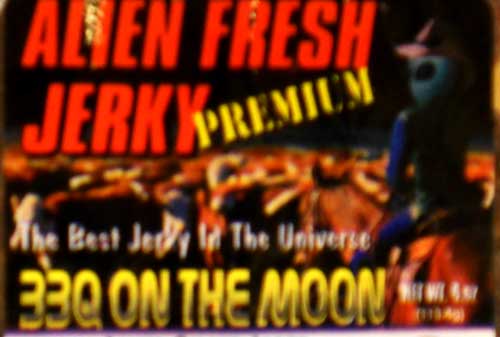 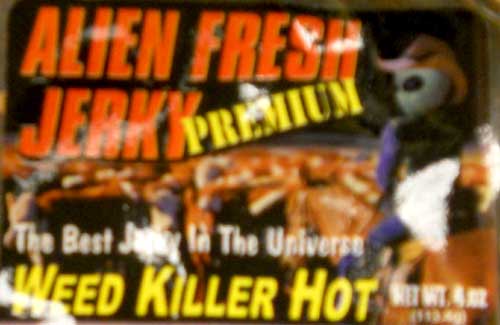 I can’t promise that these Aliens will still be there when you arrive, but I bet it won’t be long before they come back for a refill. Just be prepared with your camera turned on to snap up those pictures, if they seem to be in a good and friendly mood.